Shopping Cart
Your Cart is Empty
Quantity:
Subtotal
Taxes
Shipping
Total
There was an error with PayPalClick here to try again

Thank you for your business!You should be receiving an order confirmation from Paypal shortly.Exit Shopping Cart

For me, this was a really good session. The group had some close calls and dramatic saves that had the table on edge. Especially in that first fight when they realized they didn’t rest after saving Elsbeth from the pit. They haven’t tried retreating yet so it was do or die in their minds and was a significant moment when Elsbeth, newly minted and down to one hitpoint, rolled maximum damage to put the thing down. It was legitimate drama.

My favorite things though were in part directly related to the Knave system. Rather than classes, the system limits inventory to slots based on the characters con bonus. I’ve never played in or run a game where inventory was considered as realistically as in this game. I felt the players choice to rig up a kit to carry treasure in was deliciously authentic. Throughout the game so far I’ve enjoyed the way they choose to interact with the environment. The group has really been great, they are always down for anything and take the ups and downs in stride.

I also give credit to the system and the OSR philosophy for the game being the most fun I’ve had in a dungeon.

The gang started where they left off, in room 24, middle left of the image. After losing Esme, Balthazar and Opal dispatched the Shrieking Woman. As the bound corpse went up in flames, the two heard a woman yelling up Another escaped slave from the ship; this one an amateur alchemist named Elsbeth who was travelling to the next town when the ship was taken.

The three together continue their exploration. Opting for the mid east door first, Opal overcomes a superior lock and the group heads down the corridor to find themselves back in room 24 where they decide next to take the northeast portcullis. It turns out to be stuck, but Balthazar forces it open and they continue.

Entering the room, they are rushed by a nine foot tall Gorilla Skeleton. Combat ensues. Elsbeth meets it halfway and eats a near deadly blow as the group struggles. Balthazar and Opal chip away at the beast but it is Elsbeth, on the verge of collapse who scores a final mighty blow with the warhammer once carried by Esme. With that, the monster collapses into a pile of bones and the group searches the room.

On the far wall, behind the Skeleton is a large chest, carefully Balthazar opens it.

Inside is a set of full plate armor, worth a fortune itself and laying on a pile of 400 pieces of copper. The group declare it time to camp, Balthazar immediately dons the new armor. Balthazar sees they won’t be able to carry the money on themselves without dropping some gear. To solve the issue, he wraps the chest in his fishing net and ties the net to one of their 10 foot poles so he and Elsbeth can carry it between them. Rest happens.

A dog sized spider wanders in, they take it out and continue east. Go through 14 and 25 without incident, checking the southeast archway first, around the first turn a group of giant mosquitos fly right into them, pursued by another gorilla skeleton. The bugs go down easy and the gorilla does not nearly kill anyone. Coming out in 25 they realize they will have to backtrack to 24 and check the north exit.

Gang gets in there, part of the ceiling collapses as they go down the corridor, they hit a couple more doors but ultimately it’s another dead end.

Back to 24, backtrack toward 13 but this time staying on the south hall. Before getting to the south entrance of 13 they encounter a pair of swinging blades crossing the corridor. Now burdened with the treasure chest from earlier the group stops to consider what they should do.

Elsbeth suggests she time the blades and jump across them, then look for a way to shut the blades off from the other side. She executes the plan by getting across in the moment the blades swing out. On the other side she checks the door, discovers 13, recognizes it is the room the got into this section by. Checking the next turn of the hall, she finds two deep holes in the wall. Sticking in her own ten foot pole, one of the blades stops. She sticks her crowbar in the other hall and the group continues, going north via the far west corridor.

The exit west is a dead end and they pick a lock to get into room two where they find a fountain of healing water, realizing what a labyrinth this place is, Balthazar begins marking the doors as they go. 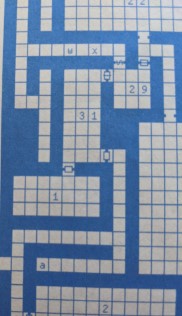 Exploration goes on, they go first south from 31 to find a Centipede no less than 15 ft long and thick. Besting the beast together at the doorway, it falls. They take a look at the room without moving further. They see an old, ruined chain shirt in the center of the floor as well as noticing largish square holes cut in the floor and high ceiling. Suspicious, they shove the large centipede corpse toward the center of the room, triggering most of the floor to collapse about 15 feet revealing a chest. Working together, the group manages to retrieve it and haul it up.

80 copper await them. A little disappointed not to find more money and armor, the group notice the chesty itself is much sturdier than the one they’ve been carrying so they transfer everything over and rig up the new chest.

With that, they go north to 29. Finding a locked door they check out the rest of the room and find the bookshelf to be a hidden door, passing through it they come to a T junction.

We called the game there.